Mwanga District is among of the blessed attraction District in Kilimanjaro Region. Mwanga is a place where there are many Tourism Attractions sites ranging from cultural to physical attractions sites. Due to the availability of many attractions sites in Mwanga, investment opportunities are available for indigenous and non-indigenous hence to improve tourism sector for the development of Mwanga economy.

District has an area of 2641 Kilometer Square; investors have the ability to establish Campsite or hotels depending on the location of the attraction sites. Example at the hills tops viewpoints to East, South West and North from the hill tops. Hotels or camp sites can also established around Lake Jipe and Nyumba ya Mungu Dam since these places have specious land suitable for tourism activities such as fishing, swimming and camel riding.

Shopping Malls, Super Market and Hotels can also invested in Mwanga town since this town has the population of 115,145 (According to 2002 Census), the place is along the main way to Kilimanjaro and Arusha Tourist Circuit. Therefore Shopping Malls and Hotels can be an incentive thing that tourist can use before reaching to other tourism sites.

Out of the mentioned above investment opportunities, hereunder are attractions sites available in Mwanga District which are also part and parcel of tourism investment opportunities. By going through these attractions, gives wide education to people who are interested to invest in Mwanga, particularly in Tourism Sector. Investors are encouraged to come so as to visit those areas, finally to decide the best area to invest.

Pare Mountains which known as Eastern Arc Mountains; At Vuchama Ndambwe point could be able to view Nyumba ya Mungu Dam, Sisal Estates in Kisangara and Lembeni, Mount Kilimanjaro and neighborhood settlements. In Mang’atu is a nice place to view the eastern plains of Mwanga, Lake Jipe, Kenya plains and settlement. At Ndanda hills one can view part of Lake Jipe and Mount Kilimanjaro. Another place is Vuchama Ngofi (Ngofi Hills) where one can could view Lake Jipe, Kivisini plains and beyond Lake Jipe/Kenya boarder.

Visit natural forest/forest reserve where some are under Government and some are under clan management. Kindoroko Forest reserve is place where one can climb Mount Kindoroko and could able to observe remnants of natural tree species, butterflies and black monkeys. Minja Forest Reserve, Kamwala I and Kamwala II also are some places where natural trees, butterflies, lesser wild animals and various birds available. Clan forests (Mpungi) are types of clan forest and are scattered all over Usangi, Ugweno and Lembeni Division. In Kileo Ward there is Kileo Local Authority Forest Reserve; this reserve has two water springs namely Mtindi and Ivonokwa which originates from Mount Kilimanjaro (down streams).

Camping Sites: There are many places in Mwanga where camping sites can be established depending on nature of execution or tailor made tour. For stance in high land areas, there is Kamwala, Ndorwe Village and Vuchama Ngofi. In low land areas there is Lang’ata, Yefuka farm and Jipe.

Agriculture and Livestock keeping Tourism: The main economic activities performed by the people of Mwanga is agriculture, livestock keeping and fishing. Coffee and bananas are grown in the highland areas where rainfall is more reliable. Since rainfall is unreliable in the lowland areas, irrigation in the Eastern, Northern and Western lowlands is popular for maize, beans and paddy production.

The District has a substantial area potential for developing irrigation agriculture. What is needed is rehabilitation and expansion of the Kivulini and Kirya irrigation schemes. Under these two schemes 420 hectares could be irrigated for growing paddy, maize and other food crops, fruits and vegetables.

Other places where tourist can visit are Nadung’oro in Karamba Ndea where wild animals gather together for getting water especially during drought season, Crocodile viewing at Kirya, particularly along Pangani/Ruvu river, miraculous hot spring water at Kirya and sisal plantations estate. 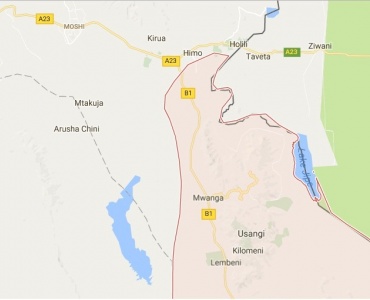 Greenbird college round about to Bomani road